The Sorcerer’s Treasure Found In Pompeii

Pompeii continues to unveil its secrets or, better to say this time, its treasures. In these days, the news of a mysterious new finding is going all around the world indeed, since it casts a light on how the inhabitants of Pompeii were dealing with magic, omens, and superstition. The archaeologists who found this unique treasure named it the “Sorcerer’s treasure trove”: a trunk containing a stash of ancient amulets along with a vast variety of fascinating yet mysterious objects such as buttons made of bones, beetles from the Orient, dolls, miniature penis, and a tiny skull. The amulets, in
Read more

Vanity: Stories Of Jewel From Cyclades To Pompeii

Pompeii and the lives of its inhabitants have always been at the core of many a debate, waving from truth to fantasy, reality to legends. A way to pierce the mysterious veil of time that covers this immortal city could be now possible thanks to the brand new exhibition running from May to 5th August 2019, called “Vanity: Stories of Jewel from Cyclades to Pompeii”. Vanity as an ephemeral pleasure always displayed through immense wealth, even in the Greek and Roman world, is indeed the theme of this unique refined even whose aim is to cast a light on the
Read more

Leda And The Swan: The Last Wonder Of Pompeii

Another extraordinary female image re-emerges in Pompeii during the new excavations of the Regio V. The myth of Leda and the swan depicted in a unique fresco has been indeed discovered during the stabilization and re-profiling of the excavation fronts, in a cubicle (bedroom) of a house along Via del Vesuvio. The painting, a triumph of sensuality, represents the junction between Zeus, transformed into a swan, and Leda, daughter of Thestios, the King of Pleuron and wife of Tyndareus king of Sparta. According to the Greek myth, Zeus, in love with Leda, turned into a swan to mate with her
Read more

Pompeii, A Recent Inscription Casts A Light On The Eruption Of Mt Vesuvius

A recent discovery in Pompeii seems to change without any doubt the date of the catastrophic eruption of Mt Vesuvius that destroyed the ancient Roman cities in the I century AD. In a letter to the historian Tacitus written 25 years after the tragic event, Pliny the Younger recalls the last days of his uncle and the violent eruption of Mt Vesuvius  dating it back to “nonum kal Septembres”, which is nine days before the beginning of September or the 24th of August 79 AD. A day that has always been taken for granted to calendar this natural disaster. Until
Read more

“In Search Of Stabiae”, A New Exhibition Casts Light On The Ancient City Of Stabiae

“In Search Of Stabiae”, A New Exhibition Casts Light On The Ancient City Of Stabiae And Its Inhabitants “In Search of Stabiae” is the title of a new exhibition that has been inaugurated at the Antiquarium of Pompeii on the 31st July 2018, and will be on display until the 31st January 2019. The exhibit will focus on the Ancient town of Stabiae that,  together with the archaeological sites of Pompeii and Herculaneum, is without a doubt an area of great interest in the reconstruction of territory settlement dynamics in Campania during the Roman Empire and before it. Thanks to
Read more

FERRAGOSTO IN ITALY: regular openings for museums and archaeological sites   Ferragosto is a special day for Italian people, celebrated every year from North to South on the 15th of August. Nowadays it is a catholic feast day in honour of the Virgin Mary, but its roots date back to the Roman Empire. The name Ferragosto comes from the Latin “Feriae Augusti”, which means “August’s rest”, and indicated the days set to celebrate the emperor Octavian Augustus, the first Roman emperor, from which the month of August takes its name. In ancient times, as a pagan feast, it was celebrated
Read more

NIGHT WALK IN POMPEII, OPLONTIS AND STABIAE A night with history or better say in the light of history. This could be the motto of the event promoted by the Ministry for Cultural Heritage and Activities that will take place from Friday 27th until 28th September along the routes of the Vesuvian archaeological sites: Pompeii, the Villa of Poppaea at Oplontis, the Antiquarium of Boscoreale and, for the first time, the Villa S. Marco at Stabiae will be illuminated on Friday and Saturday evenings for an evocative night walk. In Pompeii the night walk will begin from Porta Marina and
Read more 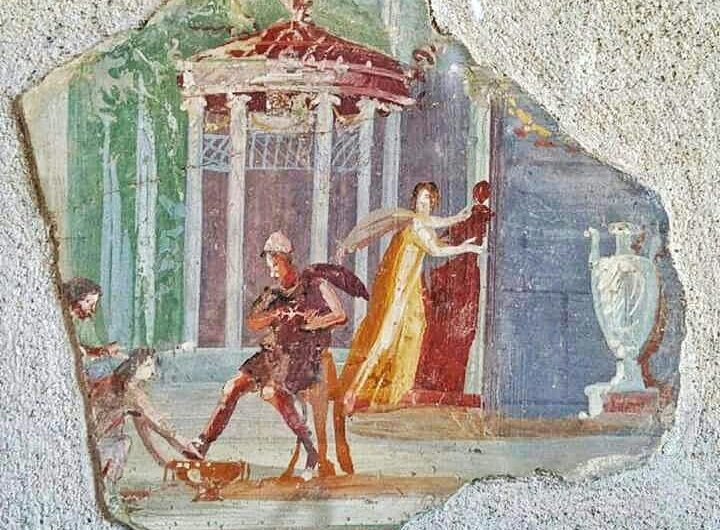 Great new openings in Pompeii: the House of the Sailor and the Complex of Championnet The exclusive panoramic terraces on the south-western edge of the Roman town of Pompeii have recently been opened to the public for the first time after major architectural and restoration works: the preservation project, part of the Great Pompeii Project, has involved the Regio VII with the Championnet Complex, consisting of several elegant residential buildings with more than 60 rooms and the House of the Sailor, a double-story building with a private spa.   The interventions have focused both on the restoration of the decorative

ArcheoTrain: from June 25th  2017 a historic train will easily connect Naples with the two archaeological sites of Pompeii and Paestum. Tourist and visitors will now be able to comfortably reach both the splendidly preserved Greek temples of Paestum and the amazing ruins of the town buried by Mt Vesuvius in 79 AD with a single train ride. The archaeological site of Paestum, the Greek town of Poseidonia, founded at the end of 7th century BC, is extremely important and has been listed in 1998 by UNESCO as part of the World Cultural Heritage (along with the National Park of

Considered one of the most interesting cultural events of 2017 in Italy and in the wider Mediterranean region, the amazing exhibit “Pompeii & the Greeks”, inaugurated on April 12 in the Palestra Grande of Pompeii,  illustrates the magnificence of Ancient Greece and its relationship with the Mediterranean Sea. Starting from Pompeii and examining its frequent contacts with the Greek Mediterranean, the exhibition sheds light on the many different souls of this ancient city, and its temporary and yet multiple identity. With more than 600 findings on display, including ornaments, ceramics, architectural elements, weapons, sculptures, inscriptions and silverware from Pompeii, Cumae,

The Musée Picasso in Paris has set up 40 exhibitions in Italy, Morocco, Greece, Spain, France and Cyprus to celebrate Picasso’s 1917 journey to Italy and his lifelong relationship with the Mediterranean basin. The global exhibit “Picasso- Méditerranée” will take place from Spring 2017 until Spring 2019 with more than 60 institutions from 8 different counties involved in developing exhibition projects on the extraordinary works of Pablo Picasso. On the occasion of this global initiative the Italian Ministry of Culture and Tourism and the Campania Region will promote the exhibit “Picasso and Naples: Parade” , inaugurated in Capodimonte Museum and

“Pompeii for all”: wheelchair and stroller accessible path

The project “Pompeii for all. Accessibility paths overcoming architectural barriers” can be considered Italy’s longest barrier-free path and it represents another step forward in the rebirth of Pompeii Archaeological Site. It makes finally possible to all visitors with disabilities to access the archaeological area in order to appreciate this unique World Heritage Site. From the main entrance of Piazza Anfiteatro to Porta Marina exit disabled persons, partially-sighted people, family with strollers or pushchairs and wheelchair users will be able to explore through a specific path some of the most important areas of town with its outstanding buildings. The itinerary, part

With the recent “Widespread Museum Project” the display of archaeological findings from the Excavations on site continues. In the Palestra Grande of Pompeii some organics finds and treasures belonging to the site of Moregine will be shown to the public in a permanent exhibit. Campaigns of excavation The first fortuitous discovery in Moregine took place in 1959 during the construction of the Naples-Salerno Motorway. The site is placed 600 m south of Pompeii Ruins, where once was the delta of River Sarno, an area that was vital to the economy of the Ancient town of Pompeii. They revealed a villa